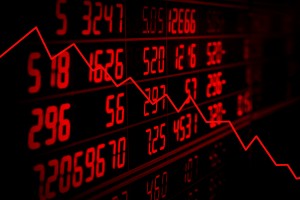 Many investors and young potential investors are still scared out of their minds because of what happened to a lot of innocent investors in 2008.  I have heard a few horror stories of people who supposedly lost all of their retirement money because of the crash.  Many young professionals are scared of the stock market because of the stories they have heard from their parents and grandparents.  But is the stock market really the issue, or is bad decision making also involved?

The Horror Story known as 2008

This is what happened to the average investor in 2008, instincts kicked in.  What I mean by that is that the average investor thinks that when the stock market is headed downward, it is going to keep going downward in a never ending spiral until the world ends.  That is just our instinct as human beings.  So as an investor, the obvious thing to do if you believe that, is to take your money out of stocks and put it in bonds, a bank account, or even under your mattress.  But the term that I use for that is selling low.  By the time most investors could get their money out of the stock market in 2008-2009,  it was already down 20 maybe even 40%.    Let’s take a look at the numbers.

On your statement at the end of 2008 you see that your small US stocks were down 38.67%.  You lost almost half of your hard earned money!  You also notice on the news that long term bonds were up 25.8% during 2008.  What does instinct tell you to do?  It tells you to leave the pain that stocks are inflicting upon you and go to the pleasure of bonds.   But is that really the best decision?

Regardless of what we know happened after the crash, it is ALWAYS a bad decision to sell low, and buy high.  But in the moment it doesn’t seem like that is what you are doing.  So let’s say you sold out of stocks and bought into bonds at the beginning of 2009.  Then at the end of 2009 you get this horrifying statement.  Long term bonds are down 14.09%.  What?  How could this happen?  You then search online and see that small US stocks were up 47.54%!   You managed to lose half of your money while those stock investors who didn’t do anything during this time did twice as good and made their money back.

I personally know people who did this, and their families are now forever afraid of the stock market.   These people blame the stock market when it was really their own emotions and fear that was the problem.   The stock market is way higher than it was before the crash in 2008 and continues to reach new highs as usual.

The Success Story known as 2008

Those investors who saw the largely negative numbers and heard the panic throughout the world, yet stayed disciplined made out like a bandit.   The best investors did exactly the opposite of what instincts told them to do, that is they bought more into stocks when the crash was happening and the prices were discounted, and sold some bonds while they were high.  Those people especially have been rewarded for their discipline.